School Project in cooperation with the kopan monastery

I am not sure how to put this eight weeks in Ladakh into a few words. I discovered the culture and happily met the children, staff and monks.
I'll never forget about the warmth everbody showed towards me. Not only teaching the children was fun but also to plan activities and to put them into action was a great experience. It was fantastic to get to know the daily routine of the children at Ngari Institute and also to gain an insight into the life of a monk or of the local people. That's why my stay was diversified as well as exciting. Saying goodbye was sad, but on my farewell everyone was dancing and also happy about this great time together.
I would love to visit N.I.B.D. again.
Many thanks for everything!

On August 8, 2016 His Holiness the 14th Dalai Lama came to visit NIBD and I was lucky enough to be there and experience his amazing presence during my stay at NIBD as a volunteer.
The purpose of his visit was the official inauguration of the Institute and of course blessing it. It was his first visit ever since he strongly advocated for its existence when the local monks wanted to engage in the reconstruction of the village temple after the devastating mudslides back in 2010. His Holiness suggested the construction of an orphanage instead, for all the children who became orphans during this terrible event and to also give children a home who come from poor families. Therefore strengthening the community and helping it in a major way. Ever since, he has been involved in this project as the spiritual leader and mentor.

Days before his actual visit, all the villagers from Saboo, Ladakh came to the institute to help: planting and watering flowers, cementing a pathway up to the monk’s hostel where the ceremony was going to be held, putting up flags, cleaning, cooking, you name it. Such a strong sense of community and serving is very rare! 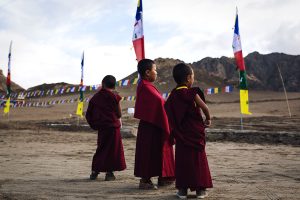 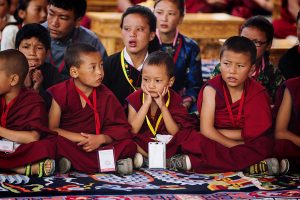 Knowing a little bit about His Holiness, the Tibetan history and buddhism, I thought I wouldn’t be much surprised by his radiating presence, thinking of the countless documentaries and interviews I’ve seen about him.
But I was wrong! I don’t know what happened but I swear I could feel his energy and presence even before he arrived and before I could see him. Then he finally arrived…sitting on his specially decorated throne (for lack of a better word), smiling contently, joking and topping all of his likeability with an immensely profound and deep teaching about buddhist philosophy and the human condition.
I could understand his massive influence just by this one hour sitting there and listing to his speech. He is an absolutely fascinating person, with a very unique sense of humor.
It was so beautiful to watch him enjoy observing NIBD’s senior students reciting the His Holiness’ Long Life Prayer, a prayer to honor His Holiness.
But one incident moved me the most, when Geshe Tsewang, NIBD’s president mentioned the two Nepalese boys NIBD took in a little while ago and their very moving story of how they became orphans, His Holiness asked them to come up to him to shake his hand and therefore receive a very special blessing from the highest Tibetan spiritual leader. What a beautiful gesture!
What was very clearly displayed in that moment was this man’s big heart! But also his humor, like I said, a very unique one. Btw.. I was still taken by his very unique laughter, which he is known for all over the world. During his speech, Geshe Tsewang translated his speech into Ladakhi, the local language spoken by the villagers who were all present. Geshe Tsewang did some minor translation mistakes which His Holiness with a big smirk, rewarded with a little hit over the Geshe’s head…twice… Geshe Tsewang later commented with laughter and said it was a very special blessing from His Holiness.
After then planting a tree at NIBD, His Holiness left with his entourage of security after his one hour visit, but this one hour has been stored in my memory forever. What a special person!!

I stayed in Saboo, Ladakh as a volunteer for almost four months. And it was the most memorable time: almost fifty loving children exploding with energy and happiness, calm and collected monks, surrounded by the buddhist philosophy and what is probably the most beautiful landscape in the world, the Himalaya Mountains.
It is definitely a big contrast to what we know and how we live here in the West. Water is a scarce resource, you have to adapt to changing circumstances, give way, of course, to the freely roaming cows, and most of all observing how these beautiful children make toys out what we would throw away like plastic caps of bottles and strings they found and excitingly showing these to me. I am so grateful to have been able to experience this.
Teaching English was fun but honestly most of all I enjoyed spending time with the kids playing volleyball and teaching them some vocals. To see them express themselves in their creativity was extremely rewarding.
NIBD, the monk and staff and all the beautiful children are very dear to me and I can’t wait to go back and visit. As a sponsor, volunteer or just a guest you are considered family and that’s how I felt during these four months.